Fresh off the boat from New York City is French restaurant Balthazar in Covent Garden, nestled in the heart of the bustling piazza and tourist central. It has long been a staple of downtown NYC, but was fast becoming a tourist destination to be avoided with hip New Yorkers. Let’s hope this won’t be the case with the London offering.

We can’t get a table until 9.30pm, on arrival this place is absolutely buzzing and still relatively packed three hours later, but then it’s new and even the celebs are keen to get in on the act. We spot Dexter Fletcher aka Lock, Stock and Smoking Barrel, Guy Ricthie film and know we were probably lucky as mere mortals to get a table on a Saturday night! 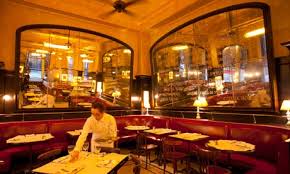 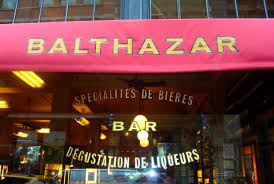 The restaurant reminds me of  ‘La Coupole’ in Paris and  has a smart Parisienne cafe/ restaurant style to it, with beautiful mirrored walls, traditional dark wood tables and chairs and red leather banquette seating. There is a fresh seafood bar with everything from razor clams to scallops and lobster.  The menu has some tasty options and we decide on a traditional prawn cocktail with King prawns and an endive salad with lardons and poached egg. Not to be difficult but the poached egg arrives firmly cooked, I don’t think I’ve ever had a hard boiled poached egg so after a slightly embarrassing would you mind taking this back at £10 a plate I felt I could ask for this. A new salad and new poached egg arrives and it was very good, with the perfect French dressing, lardons and crunchy croutons – vive la France!

The wine list for an establishment such as Balthazar is extensive from the very expensive to the well priced and I liked that I wasn’t about to be fleeced – house wine starts at £4.50 per glass which for central London is a bargain. We chose the cheaper bottle of Touraine Allion at £25 a bottle, it was average and I wondered if we had opted for the £33 bottle of Touraine if it would have been slightly less acidic.

There is also a good choice of mains and something for every discerning palate, from confit of duck to fillet steak and many fish choices. After my recent disappointing spaghetti lobster I decided to try this dish again and it proved to be a  delight, with a lobster bisque sauce, fresh lobster meat and tail and al dente spaghetti, it was delicious. My dining companion chose a whole Dorade (seabass) and a side of spinach which was perfectly cooked.

For dessert I was tempted to my favourite creme brulee or tart tatin with butterscotch sauce, but had the chocolate profiteroles with freshly made choux pastry buns, filled with vanilla ice-cream and lashings of warm chocolate sauce, extremely good, but nothing replaces fresh cream with this classic dish in my opinion.

I enjoyed the buzz of the restaurant, the servers were extremely caring and friendly, which always adds to the appeal of a restaurant especially for central London. We also weren’t rushed or told we had a two hour time limit another bonus, I would recommend you go there with at least 4 people as this seemed to allow for more elbow room. We were slightly squished into our table with a table of four directly to our left and a table of two to our right, who could have listened and probably joined in our conversation if they had wanted.

Meal for two: £50 per head including wine (excl service).

The Brigade on Tooley Street, London Bridge, is buzzing when we arrive – there’s a busy bar area with city workers and diners waiting to be seated. We’re greeted straightaway by a waitress who seats us in the open plan restaurant, which is a contemporary modern offering and open plan kitchen area.

The Brigade is not just a restaurant it also has private dining rooms, a cookery school upstairs and a wine club. And it doesn’t stop there they are working together with the ‘Beyond Food Foundation’ and ‘Babcock International’ to make a difference to young people who have been at risk or have experienced homelessness are offered an opportunity to take part in a unique apprenticeship programme called United Kitchen.

The food concept is seasonal British produce and the menu lists the best produce for the month, which is a nice touch from sesaonal vegetables to seasonal fish.

The wine list is excellent at The Brigade with a wide selection of some lovely new and old world wines and fun cocktails and ales.  We started with a glass of  Rias-Baixas Bodegas Castro Martin Albarino matched to a salad of  spiced seared tuna and a glass of New Zealand, Spa Valley, Sauvignon Blanc with the Wiltshire Venison Carpaccio with truffle oil and aged winchester cheese.

The spiced seared tuna salad whilst perfectly seared and fairly tasty lacked the wow factor of the Venison carpaccio, but perhaps I’m being slightly bias as I can’t get enough or truffle oil recently which is rocking my taste buds world.

For the main my companion chose a roasted monkfish with parmesan gnocchi and glass of rioja rosada and I chose the seared British beef fillet and glass of Argentinian Catena Malbec. The British beef was excellent quality but I had requested it medium rare and it was closer to medium, while disappointing it’s not unusal for British restaurants; so for my next steak in the UK I’ll be requesting rare and see if that works!

What I particularly loved about The Brigade is there charity concept working with people on the apprenticeship programme and making an concrete contribution to people struggling in the UK, it’s refreshing and great to see, may other restaurants folow their lead.

Overall the meal was excellent and is in a convenient spot for weekday post work drinks or dinner and even a good reliable weekend choice if you have visitors.

Spring is finally in the air in London town, and Sunday afternoon is one of my favourite days to stroll around to find a new haunt. Where better to peruse than the Fulham Road and check out the newly opened ‘ Goat’ formerly ‘The Goat in Boots’.

The restaurant scene in London has had an explosion of decent American inspired openings from Lobster and Burger to Gaspar’s in the city and now Goat, which is set to live up to the label. It has an urban almost New York feel to it and is something different for the Fulham Road residents, all steel tubes and metal grids, with contemporary wooden tables, it has a clean and modern feel. Upstairs there is a lounge/ bar with cosy seating areas, and a DJ every evening.

Service was excellent and the staff knew the menu quite well or were happy to ask the Chef if they didn’t, the menu is  relaxed New York Italian menu with, wood fired pizza and selection of fish and traditional Italian meats, as well as NYC favourites of truffled mac and cheese and peanut butter cheesecake.

A welcome addition to The Fulham Road usual haunts and a good mix of New York Italian food, I’ll be back for the truffle mac n cheese and peanut butter cheesecake